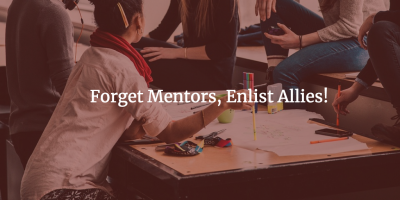 Finding a mentor who can help you along in your career with advice on everything from career moves to goal setting is a great way to help you advance your carer.

While a mentor can show you the way, based on their experience, they are only one person with one perspective. They can light the path for you, give you advice and be your sounding board. They can also bring great career advancing opportunities to you.

That means telling you about or recommending you for a job or a project that will help you grow.

Yes, having someone more senior than you in your corner is awesome.

And most of your life is spent in meetings with people other than your mentor. How do you get other decision makers or influencers to approve or support your ideas?

Developing allies can be your smartest career move

Allies are peers who make a conscious decision to support one another.

If you have a brilliant idea to share, a controversial but needed alternative or anything that goes against the status quo, your best move is to develop allies in advance.

One of my colleagues was presenting an unpopular position to their management team. It was hard, she was nervous, but she knew she had to be honest because it was killing her to sit on the sidelines and watch as the business unit she worked for was slowly dying because of bad decisions at the top. When she finished her presentation, it was quiet. Finally the CEO simply thanked her.

Now the voices in her head were berating her, “Why did you say that, why did you put yourself out there, why take a chance, I know they’re going to fire me!”

They didn’t fire her, but they didn’t listen to her. It was as if she had never spoken. No one ever mentioned it again. The business continued to falter. Nothing changed.

What could she have done?

Let’s take a look back at this fascinating article in New York Magazine about President Obama’s female staffers who enlisted allies to back each other up in meetings to be sure their ideas were heard. According to reporter Claire Landsbaum, “Female staffers adopted a meeting strategy they called ‘amplification.’ When a woman made a key point, other women would repeat it, giving credit to its author. This forced the men in the room to recognize the contribution — and denied them the chance to claim the idea as their own.”

You can use allies in this way, too, to back up your ideas in meetings.

My colleague who presented that unpopular view could have shared her ideas with a few allies before the meeting. By giving them a heads up and helping them see the benefits of her idea, she had a greater chance of inspiring change.

An ally could have been prepared with a thoughtful comment, suggestion or insight to take the fear out of the room.

Once one person sides with you publicly, you have a better chance of keeping the idea alive.

Before any important meeting, share your ideas, get feedback and line up some people to make thoughtful comments.

This is smart business if you want to be heard!