Is that what you meant? The danger of making assumptions 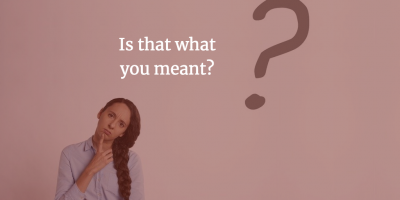 And doing so has negative affects across all parts of your life.

Imagine the last time you screwed up your courage to ask for what you want, be it a raise or an extra resource on your team to help you finish a project, and you got a NO.

When I ask people, “Why haven’t you asked for a raise?” or “Why didn’t you negotiate when you got an offer?” a big percentage of them say, “I’m afraid they’ll say no.” (Maybe this is you, too?!)

Because we tend to assume the worst, it can send you into a spiral of shame and self doubt.

“Of course my boss said no, I feel so stupid.”

Assuming the worst shows up in all parts of our lives, at work and at home, and can destroy your plans to move your life and your career forward.

Not having the resilience to keep asking, even when you get a no, can stop you dead in your tracks.

And yet, I’ve found that whatever REASON you made up in your own mind is often NOT TRUE.

“I don’t have enough experience.”

“I don’t have the right degree.” (or any degree)

“That other person is so much better than I am.”

And you convince yourself that THIS IS THE ACTUAL REASON you got a no.

Is it true or are you ASSUMING that’s the reason?

Making assumptions can be catastrophic in all parts of your life.

My friend told me this story when everything changed in his relationship with his girlfriend, the day he stopped assuming and started asking.

This morning as my girlfriend was leaving the house, she said something that really triggered me and made me mad. I was stomping around the house, thinking of all the clever things I wish I had said and what I would say to her when she got home.

I was assuming that she intended to be mean and put me down.

But then I thought…what if that’s not true? What if I’m assuming what she meant?

So I did something really radical.

And I asked her, “When you saidX, I heardY… is that what you meant?”

This moment was hard. I had no idea what she was going to say.

I have to admit that I was surprised. And then I got annoyed with MYSELF.

I’d wasted all morning stewing over what I thought she’d meant.

And I’d been WRONG.

If I had responded in a snarky mean way, based on what I thought she’d meant, it would have started a huge fight based on my misunderstanding of her meaning and intention.

This has really opened my eyes to how many times each day I make assumptions about what other people say and do.

My willingness to ask, ‘is this what you meant?’ has changed my life and my relationships at home and at work.*

Like my friend, I work hard at this. I goes against our nature to stop assuming and start asking!

When I find myself spiraling into self doubt because of something someone said or did, I ask, “Is this what you meant?”

I was in a meeting just this week and my client said she didn’t want to do something that I recommended.

I’ll be honest, my first response was annoyance and then anger. I looked at her and thought she was trying to make my life difficult. She was willfully disregarding my advice. She was dismissing my expertise. She did not respect me. You get the idea.

It was not pretty and I was really glad that she couldn’t see inside my head!

I took a deep breath and forced myself to stop assuming her intent.

Then I asked her,“I’m surprised by your reaction. I want to support you, would you share with me what’s going on…what’s your hesitation to do this?” (another way of asking vs assuming)

She told me that her boss was moving to a new division and she was worried about the new person coming in. She had worked with this person in the past and thought he didn’t like her. She didn’t want to take a chance on something new, what I was suggesting, because it felt too risky.

Aha. It had nothing to do with me!

So the next time you feel that emotional rise, maybe you’re getting angry or getting withdrawn at someone’s response, try it out.

Let me know what happens!

*For the sake of more dramatic storytelling, I paraphrased this story. The elements are all true.