A group of us were having coffee, talking about Israel.

One woman said, “The last time I was in Israel, I noticed that all the street signs were in Russian. I had never noticed that before.”

He said, “I thought they were in Hebrew, Arabic, and English.”

She said, “The last time I was there, they were in Russian too.”

He said, “I just looked it up on my phone and the street signs all over Israel are in Hebrew, Arabic, and English.”

She said, “Okay, that’s fine, I’m not trying to start an argument, I’m just commenting on what I saw.”

He was satisfied that he answered the question.

He thought, “Everyone was wondering about this, I’m being helpful.”

She thought, “What a jerk.”

He was genuinely curious about what languages the street signs are in. But the way he communicated made her feel stupid.

This is the kind of subtle Emotional Intelligence challenge that face us every day and cause misunderstanding. Because women are typically more subtly attuned to EI, we often pick up on these things and adjust our communication to fix them.

A woman in the room tried to smooth the tension, “There are many Russian neighborhoods in Tel Aviv, so you were probably in one that had petitioned the government to have Russian added to their signs.”

Everyone breathed a sigh of relief. Except for him. He didn’t notice that anything was wrong.

There’s a time and place for arguments. Ask yourself what you want to accomplish by proving the other person wrong.

Are you trying to educate? Does it drive you crazy to think that people are out there walking around thinking that there are street signs in Tel Aviv in Russian, that they might go to Tel Aviv relying on the street signs being in Russian and then be horribly disappointed (and/or lost!) when they get there?

You don’t want to argue and you don’t know what else to say, so you use “fine” to shut down the confrontation.

Its use is typically attributed to women, that when we say, “I’m fine,” that’s your cue to look us in the eye and say, “Really? You don’t sound fine.”

I think we do this because 1) we don’t want to spill our troubles out to someone who really doesn’t care or isn’t in the mood to listen, and 2) we do want to talk but are afraid that sharing a struggle will make us seem weak.

At work, the “I’m fine” syndrome spills over into confrontation in an interesting way.

How to respond to confrontation at work

Have you ever shared something in a meeting and been challenged?

How you respond will influence your credibility. If you huff, “Fine” or stomp out of the room, if you cross your arms, put on your angry face and get quiet, if you get mad and snap passive aggressive comebacks, then you are only hurting yourself. While some people will be oblivious to your response, many will see it for what it is: a temper tantrum.

They take control of a meeting by challenging you in order to make themselves look better or smarter.

Here’s a great example: My colleague, let’s call her Darlene, was presenting the results from a survey she conducted with their clients.

The results were dismal, painting a picture of a company with unhappy clients.

As she started presenting the data, someone jumped in to question the survey tool she used.

And suddenly everyone wanted to talk about the survey tool.

She lost control of the meeting and they spent her allotted time talking about the tool, not the results.

Now the guy who hijacked her meeting wasn’t thinking about HER. He was thinking about himself, how to make himself look smarter by taking the spotlight.

At the end of the meeting, when she’d run out of time and yet presented NOTHING to the team, she was really angry: at him and at herself for allowing it to happen.

Another time a colleague told me that she was presenting and used a compelling statistic in her materials. Suddenly, before she knew what had happened, she’d been challenged on the validity of the statistic, which they spent all of her time debating.

She ran out of time and did not get to present the material.

She was mad at him but madder at herself for allowing it to happen.

People hijack meetings to draw attention to themselves. They’re not emotionally intelligent enough to realize that they’re ruining it for someone else. Or they just don’t care.

You have lots of ways to respond in these situations but let’s focus on one: be curious.

In the moment, when you want to stomp your foot and huff, “Fine,” to avoid an argument, you can either talk louder or try to be more convincing…or you can be curious.

Replacing “be convincing” with “be curious” 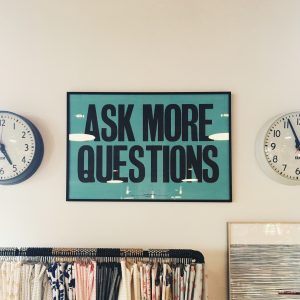 What does it sound like to replace our natural desire to defend ourselves with a genuine curiosity?

I look at reporters for the best ways to respond.

Have you heard an interview where the reporter gets attacked in some way, or the person being interviewed responds with an intentionally snarky remark?  The reporter NEVER takes the bait.

They ALWAYS respond by asking a question.

Let’s go back to Israel. It starts with her wanting to understand (curious) instead of defend (convince).

INSTEAD OF: “Okay, that’s fine, I’m not trying to start an argument, I’m just commenting on what I saw.”

TRY THIS: “Hmmmm. I wonder where I saw those Russian street signs?”

THEN DEFER: Do a new search for, “Where are the Russian language street signs in Tel Aviv?”

INSTEAD OF: “Let me convince you why this was the right tool to use.”

TRY THIS: “Let me find out why you’re asking about the tool. Why is the survey tool important?”

THEN DEFER: “I see. That is a great topic for another meeting. Our time today is to go through the survey results. Can I we agree to focus on the results and put the survey tool discussion on the agenda for our next meeting? Does everyone agree with that course of action?”

She’s retaken control without dismissing his concern about the tool.

In the meeting where my colleague used a statistic that was challenged, it starts with her wanting to understand why the statistic is important.

INSTEAD OF: “Let me convince you why this is an important statistic.”

TRY THIS: “Let me find out why you’re asking about statistic. What concerns do you have about this statistic?”

THEN DEFER: “This statistic is only a small part of the information I have to share with you today. If I promise to send you the source, can we agree to put it aside for now and focus on the topic? After reading the source document about the statistic, we’ll all be on the same page so that we can discuss it. I’d be happy to set up a meeting on that topic.”

She’s retaken control without dismissing his concern about the statistic.

The bottom line
You may find that replacing your instinct to “be convincing” with “be curious” will relieve a lot of stress.
When you stop thinking about things as a personal attack on you, when you realize that most people aren’t thinking about you at all, it’s like you’ve placed a nice, neat barrier between your emotional temper tantrum and a more confident response.

Getting curious not only gives you more information about the situation, it puts you back in control of both your emotions and the conversation.